Part of having a 1 year old seems to be that I'm bound to be asked if 埃维 is walking yet. I cringe inside, because she hasn't even been crawling. I knew that she would likely not be crawling by 12 months, and I know that every child progresses at their own pace, but it still hurts a little to say no.


It really helps me when people ask "What is 埃维 working on," instead of "Is she walking yet?" I want to hug them when they ask the question this way, because I've just been spared having to give an explanation. Usually they are people who have no idea about 埃维's medical history, but it still smarts a bit. At this point, every baby progresses at their own pace, and I know that some kids don't even walk until they are 2 without having Trisomy 21. So it's still "acceptable" that she's not walking yet.

However, 埃维 is doing pretty awesome. She is at about a 9 month old's 运动技能, and she gets better by the week. With having to wait until she was 5 months old for her heart surgery, some delay was especially inevitable.

When 埃维 was about 3 months old, we were in the Cardiology waiting room and there was a dad with a ~2 year old boy and a baby. The little boy was adorable, and I could tell that he had 唐氏综合症. I did the creepy waiting room thing and snuck peeks at them for awhile, and then said hi to the little boy when he came towards us. When I said, "How old are you?" The dad looked at me and said, "He's not really talking doing the talking thing yet." And I just said, "Oh, ok!" Face palm.   Now I understand.  His dad probably had to explain all the time why his son didn't speak yet. He was very matter of fact about it, but later I wished I had said something like how every kid had their own pace, or just told him that our baby has DS and I just think his son is adorable. Sigh.  20/20 hindsight.

All of this makes me so much more aware that when I meet a new person and don't know anything about their baby, I should ask more open-ended questions like "What's her personality like," or "Does she have a favorite toy?" I never understood until now. Kudos to my friends who are so much more sensitive to this than I used to be, and have always been asking about what 埃维 is working on lately, or what her favorite food is these days.

So what IS 埃维 working on?

Crawling. 埃维 does not want to bend her knees when she is on her tummy. She splays her legs straight out and resists us when we try to bend them for her. Then she lays her head down in silent defiance. This girl is feisty!  Gradually, each week, she resists a little less, and we've found her rocking back and forth on her knees every so often. We make sure we clap and cheer when she does that! 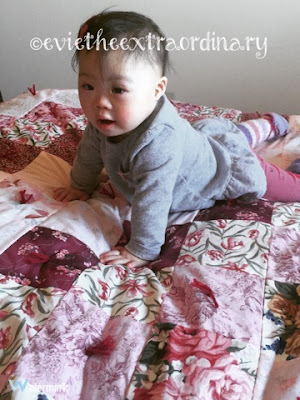 喝牛奶。  Evie hated cups for awhile, mainly because she hated her formula so much. We recently tried whole fat milk, and she doesn't hate that as much, so we will keep offering it to her in a Tilty cup to get her used to drinking again.


Signing.  Evie can wave and high five. She is ready to learn 标志语言! We are trying to teach her "All Done," "More," and "Eat."  I have to confess that I watched the famous Signing Times video and got bored and couldn't finish it. If anyone has suggestions for anything more riveting, I am all ears. In the meantime, 埃维 just humors us while we wave our hands around in her face. One day it will click.

牙齿增长。 Evie's 2 lower front teeth came in, and I have been waiting for them to be big enough so I can take a picture! Welcome, long-awaited teeth!!  I am so happy to see you, even if 埃维 now bites me when she gives me an open-mouthed slobbery kiss on my cheek. 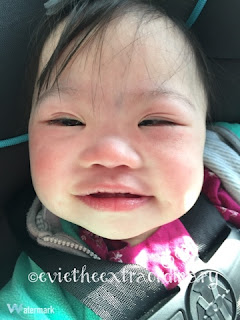 Firstly, we said goodbye to one of 埃维's many medications. This is her 6 month anniversary since her heart surgery for three holes in her heart! She has had to take half a 婴儿阿司匹林 as a preventative measure for six months after the surgery. Today we stopped on doctor's orders, and good riddance! Cutting pills in half and then getting them to dissolve in a small syringe of water to put in her g-tube is not something Daddy will miss. 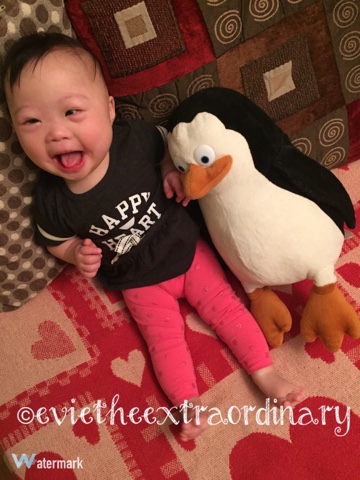 The other milestone is that we don't have to see the Ear, Nose and Throat specialist anymore! Since she doesn't wheeze with stridorous sounds from 喉软化症, and also since she hasn't had any ear infections, the doctor doesn't need to see 埃维 anymore unless she gets an ear infection. Kids with 唐氏综合症 are more vulnerable to ear infections due to their ear anatomy, but 埃维 has been lucky so far. Thank you, God! One less doctor to visit! 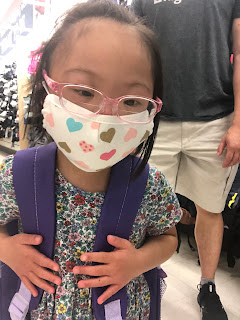